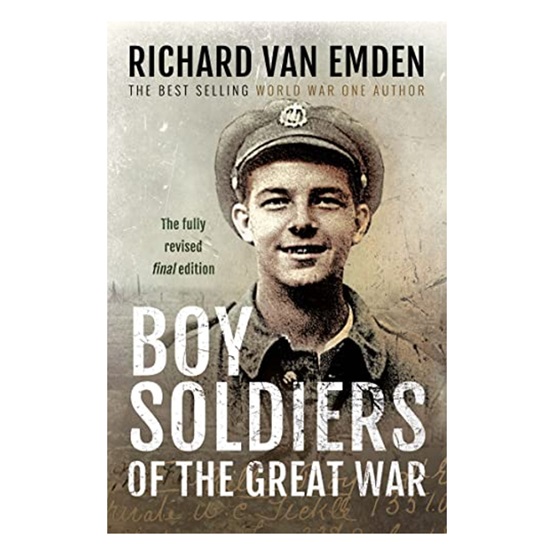 Boy Soldiers of the Great War

After the outbreak of the Great War, boys as young as twelve were caught up in a national wave of patriotism and, in huge numbers, volunteered to serve their country. The press, recruiting offices and the Government all contributed to the enlistment of hundreds of thousands of under-age soldiers in both Britain and the Empire. On joining up, these lads falsified their ages, often aided by parents who believed their sons’ obvious youth would make overseas service unlikely.

These boys frequently enlisted together, training for a year or more in the same battalions before they were sent abroad. Others joined up but were soon sent to units already fighting overseas and short of men: these lads might undergo as little as eight weeks’ training.

Boys served in the bloodiest battles of the war, fighting at Ypres, the Somme and on Gallipoli. Many broke down under the strain and were returned home once parents supplied birth certificates proving their youth. Other lads fought on bravely and were even awarded medals for gallantry: Jack Pouchot won the Distinguished Conduct Medal aged just fifteen. Others became highly efficient officers, such as Acting Captain Philip Lister and Second Lieutenant Reginald Battersby, both of whom were commissioned at fifteen and fought in France.

In this, the final update of his ground-breaking book, Richard van Emden reveals new hitherto unknown stories and adds many more unseen images. He also proves that far more boys enlisted in the British Army under-age than originally estimated, providing compelling evidence that as many as 400,000 served.

Richard van Emden interviewed 270 veterans of the Great War, has written extensively about the soldiers' lives, and has worked on many television documentaries, always concentrating on the human aspects of war, its challenge and its cost to the millions of men involved. Richard van Emden's books have sold over 660,000 copies and have appeared in The Times' bestseller chart on a number of occasions. He has also worked on more than a dozen television programmes on the Great War, including the award-winning Roses of No Man's Land, Britain's Boy Soldiers, A Poem for Harry, War Horse: the Real Story, Teenage Tommies with Fergal Keane and most recently, Hidden Histories: WW1's Forgotten Photographs. He lives in London.