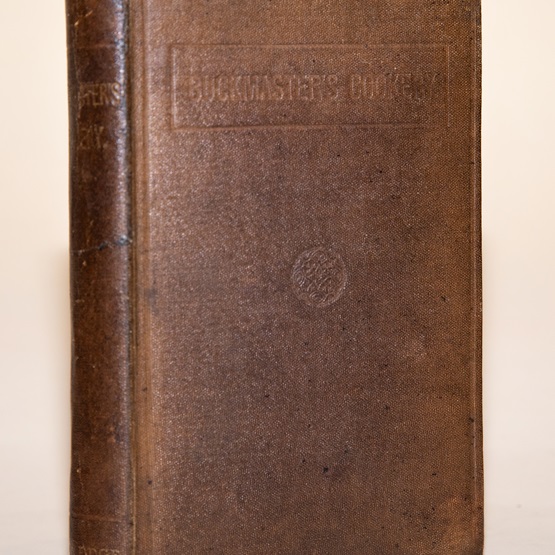 Being an abridgement of some of the lectures delivered in the Cookery School at the International Exhibition for 1873 and 1874; together with a Collection of Approved Recipes and Menus

8vo., original purple cloth, lettered in blind on upper cover and in gilt on spine, some wear but generally a good, clean copy.

Following the success of the Great Exhibition of 1851 a series of small international exhibitions were held in South Kensington, organised by the Commissioners for that of 1851. The 1873 exhibition included cookery lectures and demonstrations in a specially equipped building- free to the public but charging for copies of the recipes demonstrated. The project was successful and fashionable - so much so that Queen Victoria and Princess Louise came to watch three cooks demonstrating how to cook omelette aux fine herbes (see Lecture IX in the book).

Each demonstration was accompanied by John Buckmaster’s commentary. Buckmaster had started life as a labourer and worked his way up to be organising master of classes in the provinces for the South Kensington Museums. When Buckmaster took up cookery lecturing it was an enormous success. In 1873 alone he gave 362 lectures, 14 of which were published in 1874 in this book.

Largely because of the enthusiasm of one of the Commissioners, Sir Henry Cole, the Committee overseeing the lectures continued in being as the executive committee for the creation of a national cookery school.

The lectures include ‘Early English food and cooking; ‘Houses of the working classes’; “On Stock and pot au feu’; ‘Frying’; ‘French cooking’ &c.