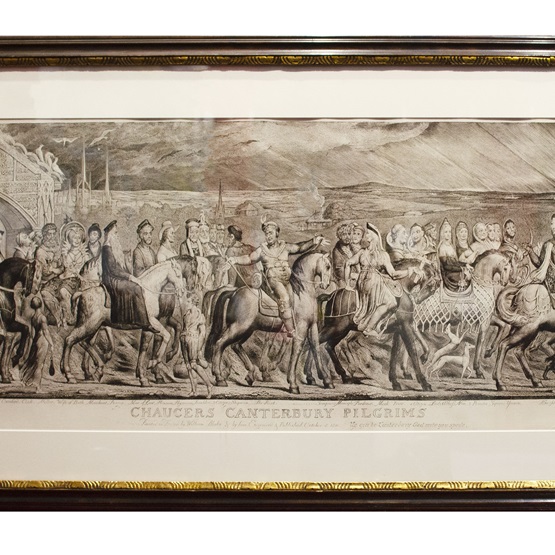 “Fifth and final state (but prior to the Sessler impressions). In terms of the dimensions of the printed image and the sharpness of the impression, this copy most resembles Essick's 5ZZ, p.74. For the printing history of this famous plate see Essick as cited below. 'Chaucer’s Canterbury Pilgrims' was one of Blake's major attempts at building a reputation as a painter-engraver and achieving the sort of critical and financial success that had escaped him for so many years."

"However, Blake wasn't to meet with the critical success he had hoped for and the competition created when Thomas Stothard executed a plate of the same subject, caused him to become bitter. Most contemporary connoisseurs probably found the print old-fashioned and 'Gothic' in the pejorative sense. The record of prices brought by the print at auction indicates that it has attracted strong interest from collectors only in the last few years." - Essick, pp. 86-88.

Blake made substantial changes in the fourth and fifth states of this famous plate and ""it is only in the last two states of the plate that we find Blake's mature artistry as an original printmaker, bringing to his largest and most ambitious single print the same techniques distinguishing his Job and Dante engravings.” Essick, Separate Plates of William Blake.