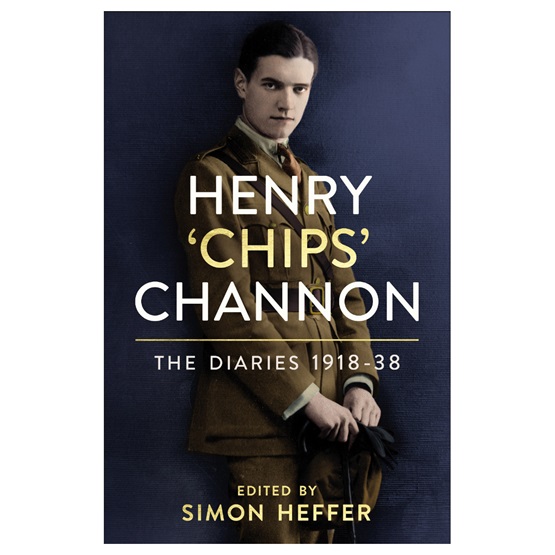 The first 300 copies sold by Heywood Hill this spring will be signed by the editor. This is the first volume of three in what is sure to become a landmark publication. All purchases of this book by 31 March 2021 will also qualify for entry into a Prize Draw to win a post-pandemic literary treat: High Tea at Heywood Hill. See below for details.

Heywood Hill is delighted to mark the publication of Volume One of this extraordinary diary with a Prize Draw. Buy the book from us before 31 March 2021 and you could win:

- Exclusive bookshop experience when the pandemic allows
- One hour to yourself browsing in our shop, or via zoom, behind closed doors
- Tea and cake, or something stronger
- £50 credit to spend at Heywood Hill

A wonderful post pandemic treat with your own personal bookseller at 10 Curzon Street.

We hope you will buy a copy from us. But you can also enter the prize draw without purchasing the book and at no disadvantage by simply sending an email to channon@heywoodhill.com. By also allowing this type of entry Heywood Hill remains on the right side of the legal boundary between prize draws and lotteries. Interesting stuff!

Born in Chicago in 1897, 'Chips' Channon settled in England after the Great War, married into the immensely wealthy Guinness family, and served as Conservative MP for Southend-on-Sea from 1935 until his death in 1958. His career was unremarkable. His diaries are quite the opposite. Elegant, gossipy and bitchy by turns, they are the unfettered observations of a man who went everywhere and who knew everybody. Whether describing the antics of London society in the interwar years, or the growing scandal surrounding his close friends Edward VIII and Wallis Simpson during the abdication crisis, or the mood in the House of Commons in the lead up to the Munich crisis, his sense of drama and his eye for the telling detail are unmatched. These are diaries that bring a whole epoch vividly to life.

A heavily abridged and censored edition of the diaries was published in 1967. Only now, sixty years after Chips's death, can the text be shared in all its glory.

Simon Heffer was born in 1960. He read English at Cambridge and took a PhD in modern history at that university. His previous books include: Moral Desperado: A Life of Thomas Carlyle, Like the Roman: The Life of Enoch Powell, Power and Place: The Political Consequences of King Edward VII, Nor Shall My Sword: The Reinvention of England, Vaughan Williams, Strictly English, A Short History of Power, Simply English, High Minds: The Victorians and the Birth of Modern Britain, The Age of Decadence, and Staring at God. In a thirty-year career in Fleet Street, he has held senior editorial positions on The Daily Telegraph and The Spectator, and is now a columnist for The Daily Telegraph and The Sunday Telegraph.

Sir Henry (Chips) Channon was born in Chicago in 1897 (although he claimed 1899 as the year of his birth, until the true facts were exposed – to his embarrassment – in the Sunday Express). The son of a wealthy businessman, he accompanied the American Red Cross to Paris in 1917, was an undergraduate at Christ Church, Oxford, and then settled in London where he mingled with society and enjoyed the high life. He married into the Guinness family, and became a Conservative MP for Southend from 1935 until his death. He knew or was friends with all the leading politicians and aristocrats of the period, wined and dined Edward VIII and Wallis Simpson in the months before the Abdication crisis, and observed at first hand the last days of appeasement. He died in 1958. Elliot Templeton in Somerset Maugham's novel The Razor's Edge (1944) and the disappointed schoolmaster Croker-Harris in Rattigan's play The Browning Version (1948) were partly inspired by Channon.

Frostquake: The frozen winter of 1962 and how Britain emerged a different country £18.99

Breathtaking: Inside the NHS in a Time of Pandemic £16.99

The Rag and Bone Shop: How We Make Memories and Memories Make Us £20.00