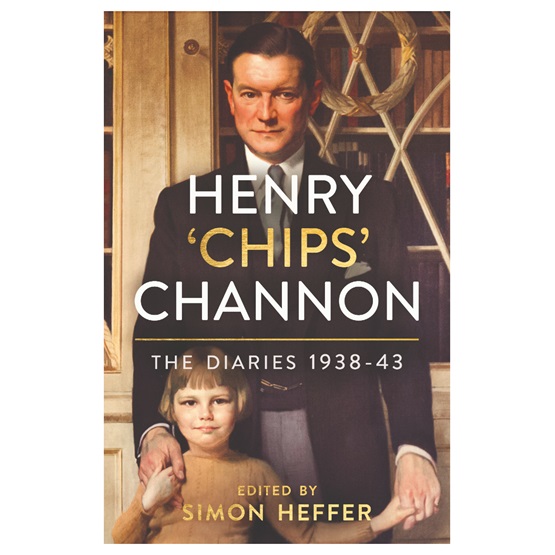 This is the second volume of three.

This second volume of the bestselling diaries of Henry 'Chips' Channon takes us from the heady aftermath of the Munich agreement, when the Prime Minister so admired by Chips was credited with having averted a general European conflagration, through the rapid unravelling of appeasement, and on to the tribulations of the early years of the Second World War. It closes with a moment of hope, as Channon, in recording the fall of Mussolini in July 1943, reflects: 'The war must be more than half over.'

For much of this period, Channon is genuinely an eye-witness to unfolding events. He reassures Neville Chamberlain as he fights for his political life in May 1940. He chats to Winston Churchill while the two men inspect the bombed-out chamber of the House of Commons a few months later. From his desk at the Foreign Office he charts the progress of the war. But with the departure of his boss 'Rab' Butler to the Ministry of Education, and Channon's subsequent exclusion from the corridors of power, his life changes - and with it the preoccupations and tone of the diaries. The conduct of the war remains a constant theme, but more personal preoccupations come increasingly to the fore. As he throws himself back into the pleasures of society, he records his encounters with the likes of Noel Coward, Prince Philip, General de Gaulle and Oscar Wilde's erstwhile lover Lord Alfred Douglas. He describes dinners with members of European royal dynasties, and recounts gossip and scandal about the great, the good and the less good. And he charts the implosion of his marriage and his burgeoning, passionate friendship with a young officer on Wavell's staff.

These are diaries that bring a whole epoch vividly to life.

Sir Henry (Chips) Channon was born in Chicago in 1897 (although he claimed 1899 as the year of his birth, until the true facts were exposed - to his embarrassment - in the Sunday Express). The son of a wealthy businessman, he accompanied the American Red Cross to Paris in 1917, was an undergraduate at Christ Church, Oxford, and then settled in London where he mingled with society and enjoyed the high life. He married into the Guinness family, and became a Conservative MP for Southend from 1935 until his death. He knew or was friends with all the leading politicians and aristocrats of the period, wined and dined Edward VIII and Wallis Simpson in the months before the Abdication crisis, and observed at first hand the last days of appeasement. He died in 1958. Elliot Templeton in Somerset Maugham's novel The Razor's Edge (1944) and the disappointed schoolmaster Croker-Harris in Rattigan's play The Browning Version (1948) were partly inspired by Channon.