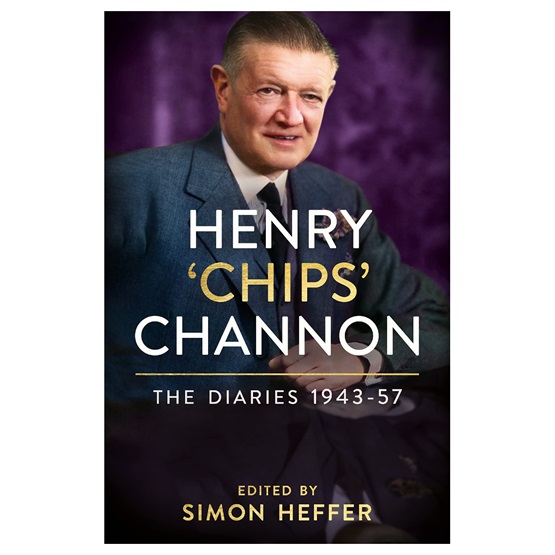 This is the final volume of three. Pre-Order your copy now. Due to be published 8th September.

This third and final volume of the unexpurgated diaries of Sir Henry 'Chips' Channon begins as the Second World War is turning in the Allies' favour. It ends with Chips descending into poor health but still able to turn a pointed phrase about the political events that swirl around him and the great and the good with whom he mingles.

Throughout these final fourteen years Chips assiduously describes events in and around Westminster, gossiping about individual MPs' ambitions and indiscretions, but also rising powerfully to the occasion to capture the mood of the House on VE Day or the ceremony of George VI's funeral. His energies, though, are increasingly absorbed by a private life that at times reaches Byzantine levels of complexity. We encounter the London of the theatre and the cinema, peopled by such figures as John Gielgud, Laurence Olivier, Vivien Leigh and Douglas Fairbanks Jr, as well as a seemingly endless grand parties at which Chips might well rub shoulders with Cecil Beaton, the Mountbattens, or any number of dethroned European monarchs.

He has been described as 'The greatest British diarist of the 20th century'. This final volume fully justifies that accolade.

Sir Henry (Chips) Channon was born in Chicago in 1897 (although he claimed 1899 as the year of his birth, until the true facts were exposed - to his embarrassment - in the Sunday Express). The son of a wealthy businessman, he accompanied the American Red Cross to Paris in 1917, was an undergraduate at Christ Church, Oxford, and then settled in London where he mingled with society and enjoyed the high life. He married into the Guinness family, and became a Conservative MP for Southend from 1935 until his death. He knew or was friends with all the leading politicians and aristocrats of the period, wined and dined Edward VIII and Wallis Simpson in the months before the Abdication crisis, and observed at first hand the last days of appeasement. He died in 1958. Elliot Templeton in Somerset Maugham's novel The Razor's Edge (1944) and the disappointed schoolmaster Croker-Harris in Rattigan's play The Browning Version (1948) were partly inspired by Channon.