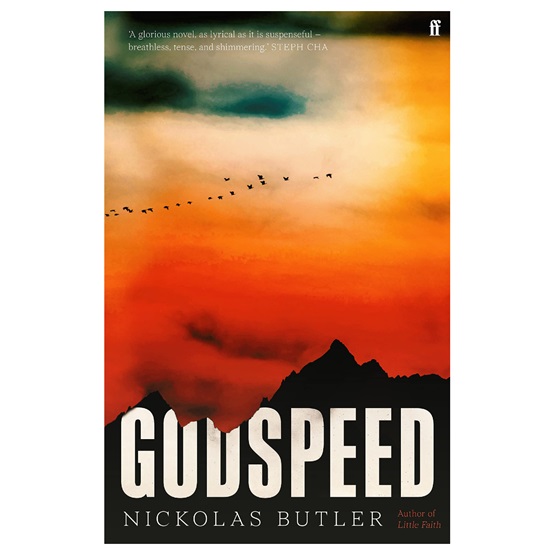 One of my favourite books is Nickolas Butler’s Shotgun Lovesongs and in his latest Godspeed Butler is once again on top form!

A tense, engrossing novel set in the mountains of Wyoming, Godspeed is the story of a race against the clock job for True Triangle, a local building firm set up by three friends as they battle against more than the elements to complete a high end property for a wealthy West coast client.

It's edge of your seat stuff, brilliantly written and American fiction of the highest order! - Andrew

'My daddy always told me, if it looks too good to be true - then it probably is.'

Bart, Teddy and Cole have been best friends since childhood. Having founded their own small-town construction company, they yearn to build a legacy, something to leave behind to their families. So when Gretchen Connors, a mysterious millionaire lawyer from California, approaches them with a stunning, almost formidable project in the mountains above their town, the three friends convince themselves it's the job which will secure their future. But what is Gretchen hiding from them? And why does the build have to be complete by Christmas, a near-impossible deadline? With the lines between ambition and greed more slippery and dangerous than the three friends ever imagined, how far will they push themselves and what will be the cost of their dream? From the author of the international bestseller Shotgun Lovesongs, Godspeed is an unforgettable tale of family, friendship and temptation.

Nickolas Butler was born in Pennsylvania and raised in Eau Claire, Wisconsin. His award-winning debut novel, Shotgun Lovesongs, was an international bestseller and optioned for film by Fox Searchlight Pictures. His second novel, Hearts of Men, was a finalist for the 2016 Prix Medicis Etrangere and his third, Little Faith, was awarded the Edward Stanford Travel Award for Best Novel in 2020. Butler, who attended the Iowa Writers' Workshop, currently lives in Wisconsin with his wife and their two children.