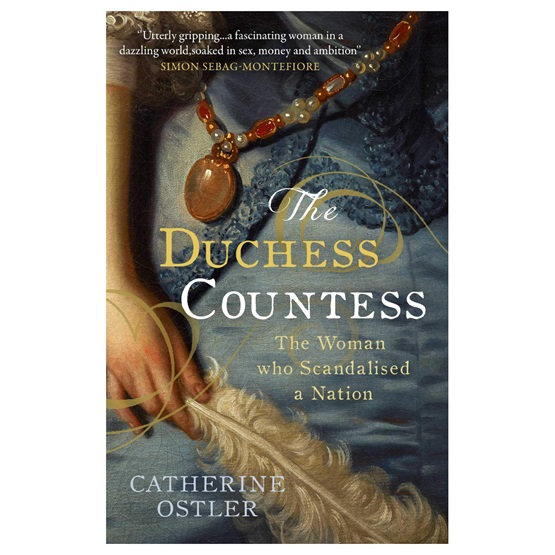 When the glamorous Elizabeth Chudleigh, Duchess of Kingston, Countess of Bristol, went on trial at Westminster Hall for bigamy in April 1776, the story drew more attention in society than the American War of Independence.

A clandestine, candlelit wedding to the young heir to an earldom, a second marriage to a Duke, a lust for diamonds and an electrifying appearance at a masquerade ball in a diaphanous dress: no wonder the trial was a sensation. However, Elizabeth refused to submit to public humiliation and retire quietly. Rather than backing gracefully out of the limelight, she embarked on a Grand Tour of Europe, being welcomed by the Pope and Catherine the Great among others.

As maid of honour to Augusta, Princess of Wales, Elizabeth led her life in the inner circle of the Hanoverian court and her exploits delighted and scandalised the press and the people. She made headlines, and was a constant feature in penny prints and gossip columns. Writers were intrigued by her. Thackeray drew on Elizabeth as inspiration for his calculating, alluring Becky Sharp. But her behaviour, often depicted as attention-seeking and manipulative, hid a more complex tale - that of Elizabeth's fight to overcome personal tragedy and loss.

Now, in this brilliantly told and evocative biography, Catherine Ostler takes a fresh look at Elizabeth's story and seeks to understand and reappraise a woman who refused to be defined by society's expectations of her. A woman who was by turns, brave, loving and generous but also reckless, greedy and insecure; a woman totally unwilling to accept the female status of underdog or to hand over all the power, the glory and the adventures of life to men.

Catherine Ostler is an author and journalist who has been Editor-in-Chief of Tatler, ES, the Evening Standard magazine and Editor of The Times Weekend. She has also written for a wide range of publications, including the Financial Times, Vogue, the Daily Mail and Newsweek. She read English at Oxford University, specialising in eighteenth-century literature.

My Autobiography of Carson McCullers £16.99