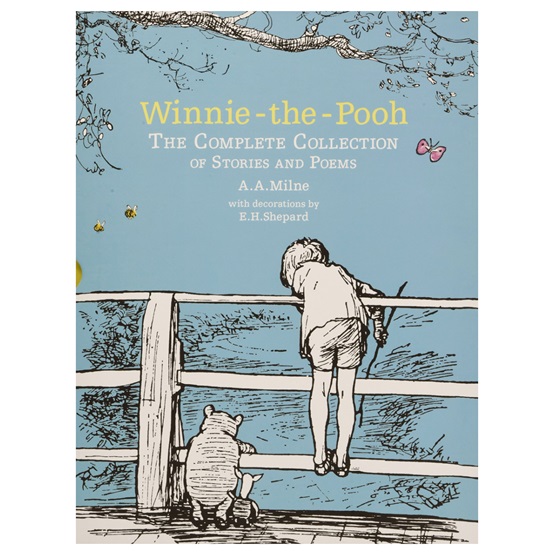 Winnie the Pooh - The Complete Collection

This beautiful new edition, re-designed for Pooh's 90th anniversary, brings together four volumes in one stunning slipcased gift book: Winnie-the-Pooh, The House at Pooh Corner, When We Were Very Young and Now We Are Six. A. A. Milne's Winnie-the-Pooh is nothing less than a true children's classic. Winnie-the-Pooh may be a bear of very little brain, but thanks to his friends Piglet, Eeyore and, of course, Christopher Robin, he's never far from an adventure. This very special collection will delight fans of Winnie-the-Pooh young and old. Relive all your favourite episodes from the Hundred Acre Wood, brought stunningly to life with the iconic illustrations from E.H. Shepard. Pooh ranks alongside other beloved character such as Paddington Bear, and Peter Rabbit as an essential part of our literary heritage. Whether you're 5 or 55, Pooh is the bear for all ages.

A.A.Milne was born in London in 1882. He began writing as a contributor to Punch magazine, and also wrote plays and poetry. Winnie-the-Pooh made his first appearance in Punch magazine in 1923. Soon after, in 1926, Milne published his first stories about Winnie-the-Pooh, which were an instant success. Since then, Pooh has become a world-famous bear, and Milne's stories have been translated into approximately forty-different languages. E. H. Shepard famously illustrated both 'Winnie-the-Pooh' and 'The Wind in the Willows' though, like A A Milne, much of his career was devoted to work for the satirical magazine Punch.