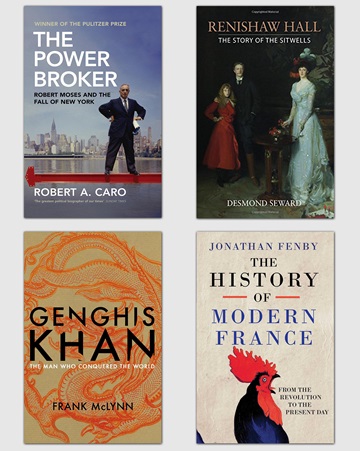 Nonfiction Pick of the Week

The Power Broker: Robert Moses and the Fall of New York - Robert A Caro

A riveting and timeless account of power, politics and the city of New York by ‘the greatest political biographer of our times’ (Sunday Times) – chosen by Time Magazine as one of the 100 Best Non-Fiction Books of All Time and by the Modern Library as one of the 100 Greatest Books of the Twentieth Century.

Previously unpublished in the UK The Power Broker tells the story of Robert Moses, the single most powerful man in New York for almost half a century and the greatest builder America (and probably the world) has ever known. Without ever once being elected to office, he created for himself a position of supreme and untouchable authority, allowing him to utterly reshape the city of New York, turning it into the city we know today, while at the same time blighting the lives of millions and remaining accountable to no one.

Genghis Khan: The Man Who Conquered the World - Frank McLynn
Genghis Khan was by far the greatest conqueror the world has ever known, whose empire stretched from the Pacific Ocean to central Europe, including all of China, the Middle East and Russia. So how did an illiterate nomad rise to such colossal power, eclipsing Alexander the Great, Julius Caesar and Napoleon? Credited by some with paving the way for the Renaissance, condemned by others for being the most heinous murderer in history, who was Genghis Khan? A beautifully produced book (not done justice but its image here) in which Frank McLynn brings to life the most powerful man ever to have lived.

Renishaw Hall: The Story of the Sitwells - Desmond Seward
Renishaw Hall in Derbyshire has been the seat of the Sitwell family since 1625. Its remarkable story is only matched by that of the family who have dwelled there. Created by the under-estimated Sir George Sitwell, a pioneer of the Baroque revival and a gardener of genius, Renishaw was also home to the better known children - Osbert, Edith and Sacheverell - who were the Bloomsbury Group's rivals in the 1920s and leading literary figures in the 1950s and 60s. In telling the tale of the Sitwells through the centuries, Desmond Seward also takes us on a tour through English history right up to the house's restoration at the end of the twentieth century.

The History of Modern France: From The Revolution to the Present Day - Jonathan Fenby
Historian and political commentator Jonathan Fenby takes us on an expert journey from the defeat of Napoleon Bonaparte at Waterloo in 1815 to the modern day as he recounts and analyses the extraordinary sequence of events of this period from the end of the First Revolution through two others, a return of Empire, three catastrophic wars with Germany, periods of stability and hope interspersed with years of uncertainty and high tensions.

More from A Year in Books 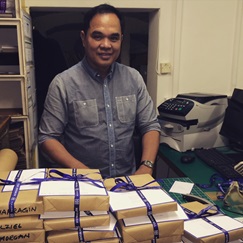