The 2012 London Library Life in Literature Award, supported by Mayfair bookshop Heywood Hill, has been awarded to Philip Mansel in recognition of the sustained quality of both his writing and scholarship throughout a distinguished career.

Launched in 2011 to revive the spirit of the former Heywood Hill Literary Prize, The London Library Life in Literature Award recognises those who have made an exceptional contribution to literary life and the enjoyment of books. Awardees may be active as writers, editors, agents, publishers or other champions of literature, reading and writing, and this year receive £10,000 from Heywood Hill.

A panel of five judges, who shall remain anonymous, met in secret at Pratt’s Club to select this year’s winner. This year the judge’s deliberations had a theme. It is particularly fitting that in 2012, the Queen’s Diamond Jubilee Year, the theme was monarchy and royal biography. After the winner was selected, and approved by Sir Tom Stoppard and the Duke of Devonshire, Philip Mansel received a telephone call from Sir Tom.

The winner, Philip Mansel, is a writer known for his profound understanding of court life, albeit in France. Mansel was presented with his Award by HRH the Duchess of Cornwall at a dinner on Tuesday 1 May 2012 hosted by London Library President Sir Tom Stoppard in the Reading Room of The London Library. 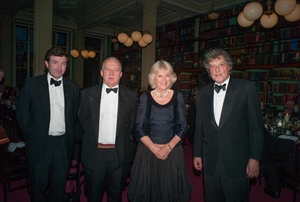