Tour the Italian Libraries of Ravenna and Venice with John Hall Tours on the 500th Anniversary of the death of Aldus Manutius (1449 -1515).

The tour, accompanied by Neil Harris, B.A. Balliol College, Oxford , Ph.D. University of Leicester , Professor of Bibliography and Library Studies at the University of Udine , provides an introduction to Italian libraries and their vast heritage of manuscripts and printed books, opening doors that are normally kept closed. Each visit consists in a guided tour of the library and a hands-on discussion with select items from the collections, in order to explain the history of Renaissance printing in Venice and the role of Aldus. The objective is to show how the advent of printing changed the nature of the book and the library as a place where books are kept.

Aldus Manutius was born in Bassiano, a small hill-town near Rome, in 1449 or 1450; he died in Venice on 6 February 1515. His contribution to Western civilization has been deep and long-lasting. Every time a computer is switched on and the default font is Times New Roman, Aldus is visibly present on the screen. At the same time what was his achievement? His Roman type designs elaborate existing models by Jenson and other Venetian printers; printing in Greek was successfully conducted in Milan from the 1470s onwards; octavo format was well known to Renaissance printers before he used it for his enchiridia of the classics in 1501; and italic type derived from the humanist handwriting of the time. One answer is the synthesis of all these elements into a coherent whole; another is that Aldus, more than anyone else, invented the Western canon, or the idea that the formation of a gentlemen, or the ruling élite, rests on the study of a remote dead language.

The tour begins from arrival at Bologna airport. The first two nights are in Ravenna, the next four in Venice, with departure from Venice airport. 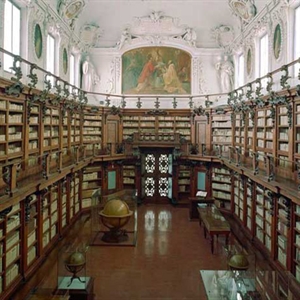