We are pleased to be welcoming Scott Anderson, author of Lawrence of Arabia: War, Deceit, Imperial Folly and the Making of the Modern Middle East to Heywood Hill on March 27th at 2pm. Scott will be signing copies of his book, published on March 6th.

And to whet your appetites here are some of the fantastic reviews Scott has already received:

The research in this book is so daringly original, and the writing so spectacular, that it feels like I'm reading about the topic for the first time. --Sebastian Junger, bestselling author of The Perfect Storm

Cuts through legend and speculation to offer perhaps the clearest account of Lawrence's often puzzling actions and personality... Anderson has produced a compelling account of Western hubris, derring-do, intrigue and outright fraud that hastened - and complicated - the troubled birth of the modern Middle East. --Washington Post

Thrilling... It's a huge assignment, explaining the modern roots of the region as it emerged from the wreckage of war. But it is one that Anderson handles with panache... Anderson brilliantly evokes the upheavals and head-spinningly complex politics of an era --Boston Globe

Lawrence in Arabia is a fascinating book, the best work of military history in recent memory and an illuminating analysis of issues that still loom large today -New York Times

Here is an intimate history painted on a very large canvas, with one fantastically charismatic - and fabulously flawed - man at the dusty center of the tale. --Hampton Sides, bestselling author of Ghost Soldiers

A startlingly rich and revealing portrait of one of history's most iconic figures... Lovers of big 20th-century history will be in nirvana. --Tom Reiss, bestselling author of The Orientalist and The Black Count

About the Author
Scott Anderson is a veteran war correspondent who has reported from Lebanon, Israel, Egypt, Northern Ireland, Chechnya, Sudan, Bosnia, El Salvador and many other war-torn countries. He is the author of two novels, Moonlight Hotel and Triage, two non-fiction books, The Man Who Tried to Save the World and The 4 O'Clock Murders, and co-author of War Zones and Inside the League with his brother Jon Lee Anderson. 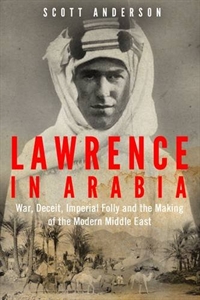