Plum Pie: an exhibition on the life & work of P G Wodehouse

Plum Pie will illustrate the life and work of Britain’s greatest literary humorist with material drawn from the Wodehouse family’s own archive, and other private collections, rarely if ever seen in public. The show includes an overview of his life and work and brings out two of the undoubted secrets to his success, his wife, Ethel, and his step-daughter, Leonora. Family photographs and objects including PGW’s own typewriter, cocktail shaker and golf putter will be on display.

The exhibition also focuses on Wodehouse’s brilliant earlier career as a lyricist for many successful Broadway and West End musicals. Songs from his shows will be played during the exhibition.

Jeffrey Kerr, Managing Director of Heywood Hill said, “It’s been a pretty gloomy year. We wanted to do something a bit different to cheer people up and to emphasise in Wodehouse’s words ‘the sunny side of life’. Anyone who enjoys reading Wodehouse should love this free exhibition.”

Henry Blofeld OBE, cricket commentator and Wodehouse devotee, will open the exhibition on 21 September. He said, “I defy anyone to leave this charming exhibition without a smile on their face, except of course for the odd mastodonic aunt in midseason form. The curators are as close to Wodehouse as we can get. Edward Cazalet has guarded the standing of his beloved step-grandfather with immense care ever since PGW died in 1975. All Wodehouse fanatics owe him a huge debt. And one would be hard pushed to find anyone who knows and cares more about the works of P G Wodehouse than Tony Ring. My hat is off to them both and to Heywood Hill for allowing us all to share in their deep knowledge of the Master.”

During the exhibition, visit Heywood Hill to:

• Win a set of the superbly produced Everyman Wodehouse collection by entering Heywood Hill’s free competition
• Discover Wodehousean Mayfair on a free guided walk, starting at 2.30pm every Wednesday during the exhibition, led by Lt-Col N.T.P. Murphy, Wodehouse scholar and author of Three Wodehouse Walks, a new book on Wodehouse landmarks in London, based on 30 years of research. Three Wodehouse Walks is exclusively for sale at Heywood Hill until 16 October.

Some Heywood Hill customers and well-known patrons of the P G Wodehouse Society have chosen their favourite book for the exhibition and Sophie Ratcliffe, editor of a forthcoming book of his letters has identified PGW’s twenty favourite authors.

Heywood Hill regular Stephen Fry said: “Heywood Hill has played a blinder. What better antidote during this pestilential year than Wodehouse? I called in at the shop the other day and bumped into Gloria, a stout Berkshire sow, browsing on the doorstep. The Empress of Mayfair had come to visit. You should too.” 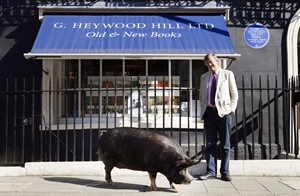