HRH The Prince of Wales: saving our history

In the Mail on Sunday on 21st February, 2016, The Prince of Wales wrote about his great love of reading and the importance of our written and printed heritage.  The target for the Prince of Wales fund is £1m, and the Prince announced that nearly £500,000 has already been raised.

At the launch, attended by philanthropists, writers, librarians, historians and celebrities, the Prince of Wales spoke of the importance of FNL’s work. FNL was established in 1931 and has helped hundreds of the nation’s archives and libraries, great and small, to acquire many thousands of archives, rare books and collections some of the UK’s most significant literary, historic and scientific collections, which would otherwise have been lost.

The Prince of Wales said that the new Fund would transform FNL’s ability to support libraries and archives across the UK to acquire books and collections that, together, are our written and printed heritage. He urged people to support the Fund, saying:

“Neither Henry Wadsworth Longfellow nor Shakespeare wrote for a select audience.  Their work was for everyone, which is why I agreed to be Patron of this important appeal for funds by the Friends of the National Libraries.

Our libraries play a crucial role in preserving the letters of writers.  Collections include poems, scientific discoveries as they were scribbled down in notebooks, precious bindings and even battle plans.  They keep our heritage alive by offering insight into the thinking of great writers whose work our libraries make available to everyone, now and in the future.  So often presented in the guise of entertainment, their words offer us the insight and sensitivity to navigate the many challenges that life can throw at us.  To let such access wither would indeed make the world an impoverished place.”

Lord Egremont, Chairman of FNL, said: “We are immeasurably grateful to HRH The Prince of Wales for allowing FNL to raise a fund in his name.  We will raise £1m to create The Prince of Wales Fund, which will help us to increase our grant-giving dramatically, and in perpetuity.' 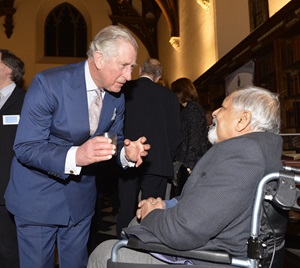