Captain in Calico, the new George MacDonald Fraser novel will be exclusively available from Heywood Hill in August 2015, one month prior to its general release on 10 September. Pre-orders of the book are being taken at the shop and online from 25 May 2015.

Written in the 1950s, Captain in Calico was rejected by publishers but nonetheless George Macdonald Fraser retained affection for his earliest work, keeping it in a fireproof safe in his study, where it was found by his children in 2013. MacDonald Fraser was a long-standing customer of Heywood Hill.

Captain in Calico features the unscrupulous and brilliantly entertaining pirate, Calico Jack Rackham. When Rackham returns from the high seas to ask Governor Woodes Rogers for a royal pardon, the Governor sees his chance to put his own devious plans into action. Their agreement sets off an adventure of betrayals, counter-betrayals, plots and escapes that see Rackham join forces with the scheming but seductively beautiful pirate, Anne Bonney.

Copies of Captain in Calico can be order online here or in the shop from 25 May 2015. Books will be delivered in early August. 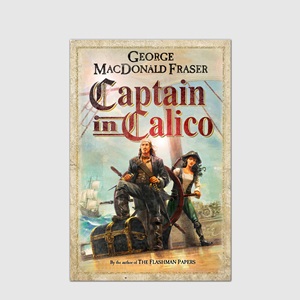