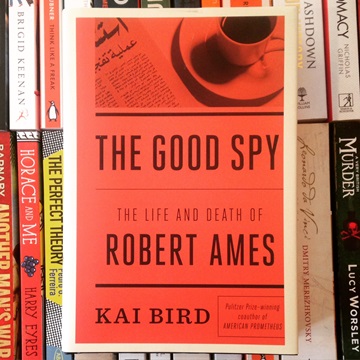 Spies and Spycraft: The best of the latest new nonfiction

The New Spymasters: Inside Espionage from the Cold War to Global Terror by Stephen Grey
A modern history of espionage, from the CIA's Cold War legends, to the agents who betrayed the IRA, through to the spooks inside Al-Qaeda and ISIS. Techniques and technologies have evolved, but the old motivations for betrayal - patriotism, greed, revenge, compromise - endure. This is a revealing story of how spycraft and the 'human factor' survive, against the odds.

The Forgotten Spy: The Untold Story of Stalin’s First British Mole by Nick Barratt
Nick Barratt delves into the murky waters of the British and Soviet secret services of the 1920s and 1930s, to reveal the story of his great uncle Ernest Holloway Oldham - known as ARNO to his Russian 'handlers'.  As Ernest was drawn ever deeper into the underworld of pre-Cold War espionage he began a double-life that became the darkest of secrets.

How To Catch a Russian Spy by Naveed Jamali (Aug 2015)
In 2008, an average American man helped to bring down a top Russian spy based at the United Nations. He had no formal espionage training. Everything he knew about spying he'd learned from books, films, video games and TV. And yet, with the help of an initially reluctant FBI duo, he ended up at the centre of a highly successful counterintelligence operation that targetted Russian espionage in America.

The Good Spy: The Life and Death of Robert Ames by Kai Bird
The Good Spy is Pulitzer Prize-winning biographer Kai Bird’s portrait of the life and death of one of the most important operatives in CIA history, Robert Ames. The book draws on interviews with Ames’ widow, quotes from Ames’ private letters and it’s woven from interviews with current and former American, Israeli, and Palestinian intelligence officers as well as other players in the Middle East “Great Game.” It reveals the making of a CIA officer, is an insightful history of twentieth-century conflict in the Middle East and an absorbing hour-by-hour account of the Beirut Embassy bombing where Ames met his untimely end.

Double Cross In Cairo: The True Story of the Spy Who Turned the Tide of War in the Middle East by Nigel West
As part of the infamous Double Cross operation, Jewish double agent Renato Levi proved to be one of the Allies' most devastating weapons in World War Two. Until now, Levi's deceptions and feats of derring-do have remained completely hidden. Using recently declassified files, Double Cross in Cairo uncovers the heroic exploits of one of the Second World War's most closely guarded secrets.

Intercept: The Secret History of Computers and Spies by Gordon Corera (pbk)
This is the previously untold - and previously highly classified - story of the melding of technology and espionage. Gordon Corera takes us from the Second World War to the internet age, with astonishing revelations about espionage carried out today.