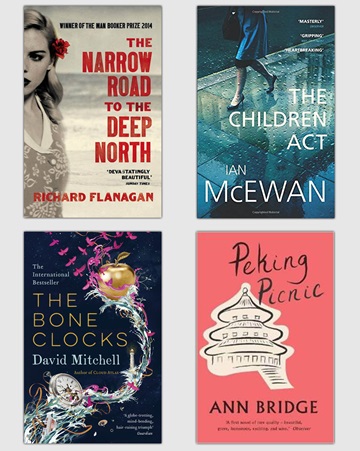 Narrow Road to the Deep North by Richard Flanagan - Do not be put off by the rather natty paperback cover of this brilliant novel. A worthy winner of the 2014 Booker Prize and one of the best prisoner of war novels for many years. An original and imporant piece of writing by the Australian author.

Children's Act by Ian McEwan - Recommended by our own Karin Scherer in the Autumn Recommended Reading List she wrote: 'McEwan manages to surprise all through this book, right up to the last page'.

The Bone Clocks by David Mitchell - Also tipped as unmissable by Karin Scherer when it was released in hardback she wrote at the time: 'Mitchell has proved once again that he is one of Britain's best novelists and certainly one of the most versatile and imaginative. Sublime.' This is an extraordinary piece of fantasy fiction under the guise of a state of the nation novel from the master storyteller.

Peking Picnic by Ann Bridges - One of the latest books to be republished by Daunt Books. Originally written and released in 1932 it is Ann Bridges first and best known novel winning the Atlantic Monthly prize at the time. Set in the vanished era of 1930s Peking it brings brilliantly to life the exotic allure of the ancient city as seen by Laura Leroy, the wife of the British attaché.