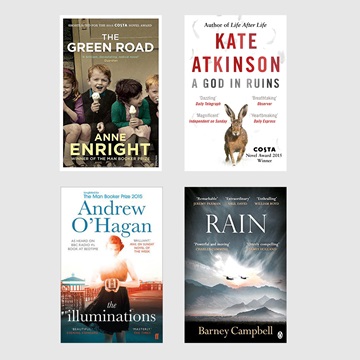 The Green Road by Anne Enright - Karin Scherer says: 'Anne Enright says of her own book that it is about love and abandonment, exile and return, all those impossibilities. Yes, it is but she is a little unfair to herself because she short-changes herself. It is a story of an Irish family coming together for a last Christmas told in a language filled with truthfulness, wit and in a dialogue ready to be read aloud. A marvellous story by a master of the craft.'

Rain by Barney Campbell - one of the best received debut novels of last year, Barney Campbell's novel of war, reaped from his own experience in Afghanistan, is a remarkable account of a modern combat soldier's life on tour. Incredibly powerful and deeply moving.

The Illuminations by Andrew O'Hagan - Karin Scherer says: 'A beautiful, deeply charged story about love and money, about modern war and the complications of life. Anne Quirk, an elderly woman was, in her youth, a pioneer of British documentary photography. Her grandson Luke, a captain in the army, is on a tour of duty in Afghanistan. Only when Luke returns home do both their secret stories slowly unfold. How much do we keep from loved ones? Is the truth often buried in secrets?'

A God In Ruins by Kate Atkinson - Winner of the Costa Novel Award 2015 and sequel to the much admired Life After Life (which also won the Costa Novel Award). This time following the life of Teddy Todd, Atkinson investigates the impact of war on those who lived through it and subsequent generations. A tour de force.