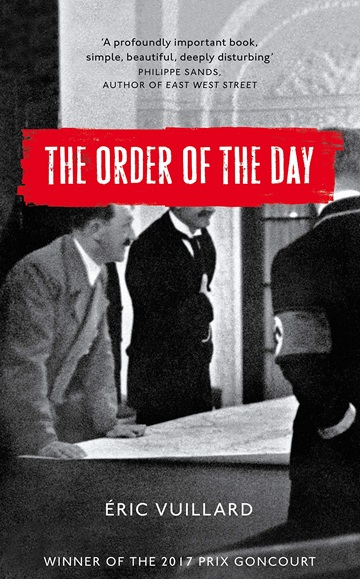 The Order of the Day

"This is, more or less, fiction, but you could be forgiven for reading it as a kind of chatty, intimate history; there is no protagonist, and no narrator save for an omniscient voice that has somewhat the flavour of Thackeray's knowing asides to the reader. The story is of how Germany became the Third Reich: the meeting of industrialists who bankrolled Hitler, the bulldozing of the Austrian chancellor, Kurt von Schuschnigg, the way Germany took over Austrian state mechanisms while retaining a thin veneer of legality, and finally the actual invasion. It reads, in a way, like a piece from an older time; the novel's interest in the interior lives of its characters is most often demonstrated not by taking us into that character's head, but by describing that character to us with utter clarity and insight. Yet it succeeds in being moving, even heartrending, in its descriptions of men who caused terrible damage but whom Vuillard wants us to see clearly."

Buy a copy of The Order of the Day here.