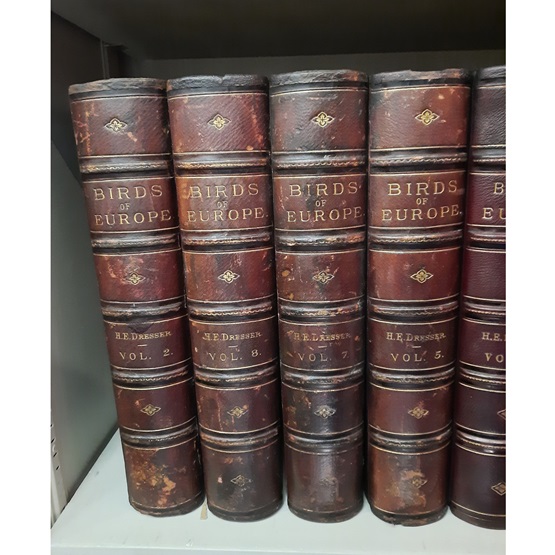 A History of Birds in Europe

9 volumes, large 4to., in half morocco binding by R.H. Porter, lettered in gilt on spines. A little rubbing and scuffing to spines, otherwise a very good set.

Dresser's "magnificent treatise" (Wood) includes birds from "the whole of continental Europe to the Ural range, Scandinavia, Spitzbergen, the British Isles, Iceland, the Faeroes, the Azores, Madeira, and the Canary Isles, a comparatively narrow strip of North Africa, reaching to the border of the desert, Asia Minor (excluding the Jordan valley, which is essentially Ethiopian), and the Caucasus" (Introduction). Originally issued in 84 parts plus the 9 part supplement.

Dresser's Birds of Europe is the first complete work on the avifauna of Europe since that of Gould. Henry Eeles Dresser (1838-1915) was the eldest son of Henry Dresser and Eliza Ann Garbutt; he had five sisters and three brothers. His father intended him to take over the family business in the Baltic timber trade so took him out of school in Bromley and sent him to Ahrensburg in 1852, to learn German and in 1854, to Gefle and Uppsala to study Swedish. Henry Dresser spent a time in Hackman's offices in Vyborg learning Finnish during 1856 58, during which time he travelled round the Baltic coast. Dresser had a lifelong interest in birds and collected bird skins and eggs from his early teenage years. Whilst he was in Finland in 1858 he discovered breeding Waxwings and was the first English person to collect their eggs bringing fame among English ornithologists, most of whom were egg and skin collectors.

Dresser was a leading figure in ornithological circles: he was elected a Member of the British Ornithologists Union in 1865 and served as its secretary from 1882 to 1888. He was a member and fellow of the 'Linnean and Zoological societies of London and an honorary fellow of the American Ornithologists' Union. He was a close friend of Professor Alfred Newton, Thomas Littleton Powys, 4th Baron Lilford and Alfred Russel Wallace and he knew all the leading ornithologists of his day. He was particularly well-known to European, American and Russian ornithologists. He worked with Alfred Newton on the development of a close time for British birds when they could not be hunted during the 1860s and 70s, an early part of the development of the bird conservation movement. He was heavily involved with the early Society for the Protection of Birds (which developed to become the RSPB).